So It's goodbye 2021 and hello 2022, and I would like to wish everyone all the best for the New Year. I would also like to thank those who take time to read this blog (although I use the term blog lightly). Unfortunately I came down with a nasty chest infection at the beginning of December and am only getting back on my feet now. It was a nice surprise therefore when I saw I'd had over 500 views for the month. I know this isn't many in the grand scheme of things, but it cheered me up never the less.

What surprised me was the diversity of the viewing audience which literally spanned the globe. and once again I would like to say thank you for dropping by. I would also like to say please say hello and leave a comment or two. Either here or DM my twitter page which is @PeterBainbrid13  When I started this blog it never entered my head my ramblings/stories would be read in Country's as far apart and diverse as Canada and Indonesia.

As with the start of every new year it's the time when we all make new years resolutions and promptly break them with hours/days of doing so. Last year mine was to  finish a novel and try and get it published which needless to say didn't happen, or at least the latter half of that statement didn't. At the beginning of December I did finally finish a novel which falls into the genre of romantic crime fiction. I say finally as I don't think we writers ever finish a piece to our satisfaction and would tinker on forever  if we got chance.

Having made a conscious effort to leave well alone it's now time to take a step into the unknown and try and get it published. If I'm being honest I'm finding this a bit daunting for the simple reason I don't know where to start, but start one must. Maybe I'll put a few updates up here and let you know how I get on.

Going forward I'm going to try and put up my daily ramblings through the countryside with Scout April. Partly because friends and family have suggested it, and partly as a motivational tool for myself. Going back to my health issues staying motivated equates to staying positive which is something I haven't felt over the last three or four weeks which is something I need to address. 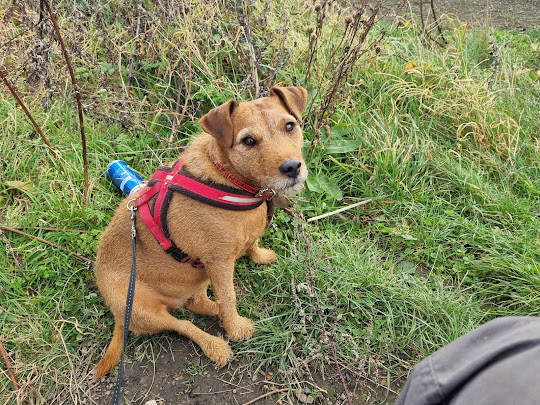 Scout April
For me the most positive thing to come out of 2021 was my increased fitness and decreased waist line as a result of  my daily walks. Looking back now it's hard to think this time last year a two mile walk seemed like a long way. Don't get me wrong it wasn't easy and there were a few tears along the way, but as hard as it was the effort was worth it.
As mentioned previously this was achieved by setting myself  realistic goals and gradually increasing the mileage walked until we reached the heady heights of twelve miles which was enough. It certainly was for me and I think it was for Scout who's little legs are a lot shorter than mine. Anyway we hope to add many more over 2022 and have one planned which features some interesting archaeological features dating back to the 1st Century. All we need now is for the rain to stop....