Reviews aren't my forte, but I thought I would write this one for the normal everyday walkers like me. Walkers who may not cover vast distances or scale dizzy heights, but never the less like a decent pair of  boots on their feet. I would also like to point out this review is being written nearly five months after purchase and not when the boots are fresh out of the box. I walk every day and on checking my exercise tracker my new(ish) boots have clocked up four hundred  and seventy miles since I bought them in October 2021. Certainly enough time to form a decent opinion I would say.
So what were my requirements? As stated above I walk every day anywhere between  three and eight miles with the odd longer walk around the ten/twelve mile mark. I'm more of a rambler than a hiker and my days of covering long distances over difficult terrain are long gone. That being said walking everyday means walking in all weathers and the requirement for something both waterproof and breathable was high on the list, as was comfort, there is nothing worse than waking in uncomfortable or ill fitting boots.  I'm also  a traditionalist and wanted a leather boot which (hopefully) could be resoled when the present ones wore out.
After searching through a plethora of reviews on more websits than I care to to remember I wasn't a lot further forward as for whatever reason reviews seem to fall into two categories:  the fresh out of the box type which says I've got a shiny pair or boots, or the type which are aimed at serious walkers/hikers whose abilities and aspirations are a world away from mine. In the end I opted to take the advice of a family member and drove to the Cotswold Outdoor store on Catterick Garrison. All I can say is this was the best decision I made as the guy who served me was both knowledgeable and helpful and after listening to my requirements/ measuring my feet suggested three different options, one of which was the Scarpa Trek GTX.
I must admit I liked these boots from the moment I tried them on, what I didn't like was the two hundred and twenty quid price tag, but bit the bullet never the less. So the big question is five months down the line do I think they were worth it?  Read on to find out...
Description
There's an old adage  that says if something looks right it probably is right and the Trek GTX certainly look the part. The boots themselves feature an all leather upper with a waterproof and breathable Gore-tex lining. They  also have a high ankle which gives good support, something which was lacking on my previous boots. There is a very supple leather tongue which reaches to the top of the boot and a total of seven pairs of eyelets, three of which are open and four of which are closed. Another feature which I liked was the the protective band which runs around the circumference of the boots, a must for serial toe scuffer's like me. The sole is a Vibram Biometric Fly and according to Scarpa's website are  resolable when they wear out which was also a must. 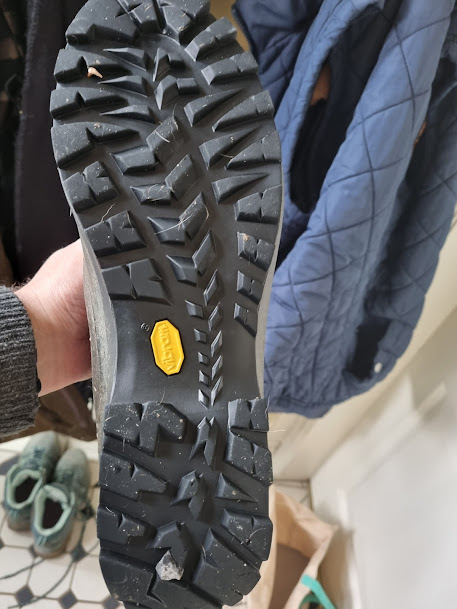 The Vibram sole which had 470 miles on the clock when the above photo was taken.
Comfort
After more than four months of daily use I can honestly say the Scarpa Trek GTX boots are the most comfortable footwear I've ever worn bar none. I simply can not praise them enough from this point of view. The sole of the boot offers good support with just the right amount of give and the Goretex lining does exactly what it says on the tin allowing ones feet to breathe and avoiding sweaty sock syndrome.  What I would say however is according to Scarpa's website these boots were designed for those with a slimmer heel which is a category I fit into, my feet being long and narrow. If you have wide feet, or big heels, it might be worth asking the stockist if these are for you first.
One thing I would also  like to mention is prior to purchasing these boots I suffered from exercise induced vasculitis (EIV) or Disney Rash as it's often called. This is a nasty red rash/blotching which occurred if I walked anything over seven or eight miles, or any prolonged distance on a hard surface such as tarmac. This has become a thing of the past  when wearing these boots. I first noticed this after walking twelve miles in upper Teesdale after which  the rash failed to appear. As a test I walked a given route in my old boots and hey presto the rash was back. A week later I walked the same route wearing the Trek GTX and there wasn't the slightest sign of blotching. Don't get me wrong I'm not saying these boots are a cure for EIV, what I am saying is they've cured it for me.
Daily use
Being a daily walker of a certain age a big plus with these boots is the ability to  step in and out of them once the laces have been un-threaded from the top three sets of eyelets and the tongue pulled toward the front of the boot. There's no shoe horning, tugging or pulling required, simply slip your foot in or out as the case maybe . It's just a small detail, but one which makes a lot of difference to the likes of me who aren't as flexible as they once were. 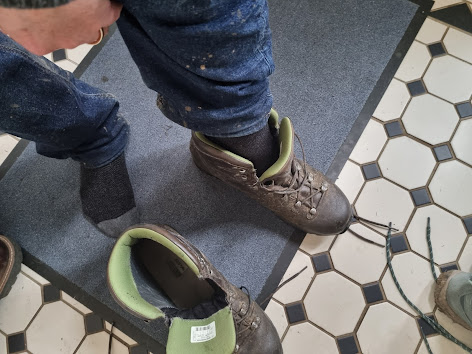 With the laces undone from the top three sets of eyelets its simply a matter of stepping in or out.
No tugging or shoe horning required - bliss.
Once on and laced up the boots are comfortable fit, so much so I would wear them 24/7 if I could get away with it. Out on the trail they are sure footed in all conditions, and believe me living in the North of England they have been well tested. Although most of my walking involves field paths and woodland walks I have taken the Trek GTX over more extreme rocky terrain and they performed as well as any boot I've had in the past. The Vibram soles grip well, even on wet, slippy limestone (or as well as one could expect) and it wasn't long before I felt confident in them no matter what the terrain.
Mud retention, something which rarely gets mentioned. Walking the public footpaths and bridleways of northern England in winter means mud is an inevitability. I'll be honest and say it's one of my pet hates especially when I end up with 2lb of the stuff caked to the bottom of my boots. My old boots were particularly terrible when it came to clogging up with the stuff and it didn't matter how hard I kicked them against something solid like a road side kerb I could never unclog the treads. Wether by accident or design this isn't the case with the Trek GTX which don't seem to clog up anywhere near as much. I've also noticed walking the last half mile or so on tarmac clears most of the treads leaving a bare minimum to be either scraped or knocked off by hand.
One concern I had was how the boots would perform on snow and ice, and by that I mean normal walking on snow and ice, not scaling the north face of the Eiger. This has always been an unknown for me when buying boots in the past, just as it was on this occasion. Once again this is a particular issue for me as a pair of boots I had in the past were brilliant right up until the moment the temperature dropped below zero where upon they acquired dangerous Teflon like none stick qualities. I can happily report this isn't the case with the Trek GTX which performed well on both snow and Ice and provided me with a reasonable amount of confidence when negotiating some of the more slippery slopes I encountered. Once again I must stress this was not on extreme terrain, never the less it was test passed as far as I was concerned.
Conclusion - So in answer to the question were the Scarpa Trek GTX boots worth the £220 price tag for me the answer has to be yes. If nothing else they were worth it for resolving my EIV issues. Putting that aside however, the boots are the most comfortable foot wear I've ever worn. It's not just that though, it's the little things like being able to easily slip them on and off , the lack of mud retention, the sure-footidness, the breathability and waterproof qualities which when added together make a daily walking experience all the more enjoyable. Scarpa also say they can be resoled which over time will make the initial outlay less of a hit. 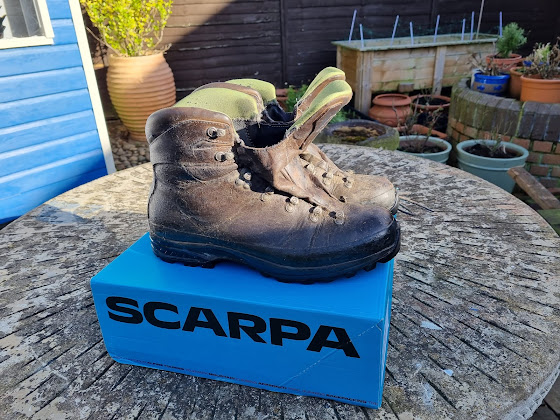 The Scarpa Trek GTX boots after been treated with Granger's waterproof wax. Once again they had walked 470 miles at the time the photograph was taken.

Update. - So it's taken nearly six months of constant use before I had anything negative to say about these boots and even then it's only a minor point in that one of the original laces failed. This came about when the outer beading unraveled  itself rendering the lace useless. I say its only a minor point but at the same time if you spent £220 on a pair of shoes and the laces failed after six months you'd probably be a bit miffed. Something for Mr Scarpa to think about maybe. As it is I replaced the original laces with a leather pair which was an altogether better idea. Should you find yourself in a same position the replacement laces need to be at least 120cm long. 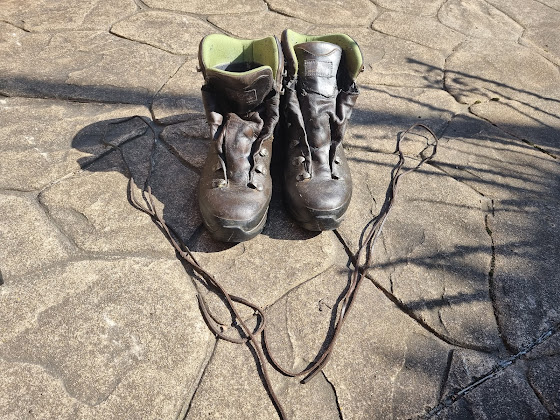 My boots with their replacement leather laces, an altogether better idea costing the princely sum of £3.

OFF THE TRACKS - DERAILMENT IN NORTHALLERTON AUGUST 1979