OUT AND ABOUT WITH SCOUT - COPING WITH SARCOID

Not much more than six months ago the thought of walking anything much more than a mile was little more than a dream. If I tried I would quickly become out of breath and suffer fatigue like symptoms for days to follow. To say nothing of joint pains and swelling. This was all as a result of being struck down with Sarcoidosis in 2016. Couple this with the Covid situation and my mental health was starting to suffer badly.
It didn't help that pre sarcoid I was a very fit, active person who had been a life long cyclist and hill walker. Seemingly overnight I turned into an old man of ninety who would get breathless walking up a flight of stairs let alone one of the nearby fells. It was all very depressing, but over time I came to accept it and instead of moaning about what I couldn't do focused on what I could do.
This sounds sensible, and to a point is. I refocused on less physically arduous pastimes such as writing and model making which certainly kept my mind active. There is a trap however, which people like myself with a chronic condition, are in danger of falling into. It's a type of conditioning I suppose where after a period of time it becomes too easy to dismiss taking part in certain activities due to your illness. It's not something that happens straight away, more something that creeps up on you over a period of time. The hard part is recognizing it in yourself and doing something about it.
My wife put this into perspective when she said it's easier to find a reason not to do something than it is to find one to do it.  Never a truer word said.
With these wise words ringing in my ears I decided it was time to stop moping about and get my life back. As I mentioned previously I used to be keen hill walker and although walking up the likes of Scafell Pike was no longer an option meandering around some of the local lanes with the dog was.
We actually have two dogs, Jasper a Rottweiler/Pointer cross and Scout a Lakeland/Patterdale cross. Unfortunately Jasper has issues with his back legs which means his exercise has to be carefully managed limiting him to two or three short walks a week. The ginger ninja on the other hand has no issues and for the most part my walks have been with Scout in tow. Although Scout would probably view this differently and say most of her walks have been with me in tow.
Scout April - Do not be fooled by the cuteness, it's a ploy.
For me the biggest danger was I would try and do too much and burn myself out. Something I've often been guilty of in the past.  It didn't help the area where we live in County Durham isn't exactly flat and whichever way I walked was going to involve a hill. One thing this area does have however, is a wealth of history, be it the Roman Road which passes close by or the local pit villages. Indeed Shildon, the town where I live, rightfully claims to be the birthplace of the railways and the worlds first passenger train set off from here on the 27th of September 1825. Apparently it took 3 hours and seven minutes to travel the twenty five miles to Stockton on Tees. Having spent a large chunk of my life  driving 40 to 50 thousand miles per year on Britain's motorway system  I could say not a lot has changed.
The point being there is always something to make what would be otherwise mundane walks interesting. Take yesterday for example when I discovered a building I had been driving/walking past for God knows how many years was Shildon's first Railway station. It's just something else to think about if you are still looking for reasons why not, as it doesn't matter where you live, once you scratch the surface there will be something interesting underneath. 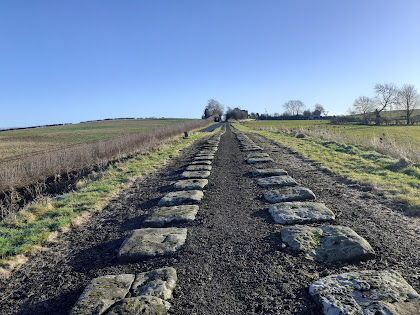 The picture above shows stone sleepers on Brusselton Incline, part of the original Stockton to Darlington Railway. Incorporating pieces of local history such as this into my walks has helped keep me motivated when it would have been only too easy to succumb to the aches and pains of Sarcoid.
The upshot is over the last three or four months I have got progressively fitter and Scout and I have found ourselves venturing further and further, on some days covering six or seven miles. Yes I still suffer with joint pain in my ankles and yes I do get fatigued, but these are far outweighed by the improvement to my general well being and mental health. I know Sarcoidosis effects different people in different ways and not everyone will want to go for walk, all I would say is if you are a sufferer please find a reason  to improve your life and don't go looking for the easier options and do nothing. You will feel better for it in the long run. 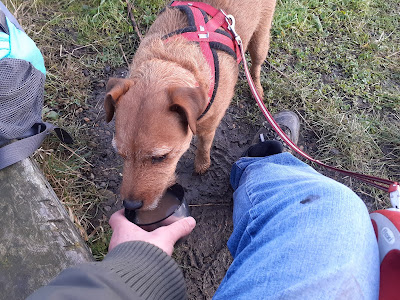