234 days, that's how long I've been under virtual house arrest. 234 long days. No wonder lethargy and losing the will to live seem to stalk me from the shadows. During that time I won't have been out of the house more than a dozen times, and none of these were to anywhere exotic. Unless you class Seaton Carew and Shildon High Street as such. Still one must keep ones chin up and not turn into one of these whining, whinging bastards who keep popping up on the TV with an annoying regularity.

One thing I do seem to do a lot of is cook and bake to the point come the weekend I have turned into meals on wheels and delivering the likes of Shepherds Pies and Cheese Scones to elderly relatives. Which reminds me having put pictures of said cheese scones on facebook and twitter I have had a number of people asking for the recipe. The Cheese Scone recipe itself is a variation on my mothers and is as follows:-

Preheat oven to 220 degrees C (none fan). Mix the flour and ground black pepper then rub in the butter or margarine until you have a fine crumb. Grate the cheese and add it to the crumb mixing it in thoroughly with your fingers to get a nice mix. Add the Mustard to the milk and beaten eggs and stir well. Add this to the flour/cheese and mix/knead into a pliable dough. Cut with a scone cutter and place on a baking tray. You should have enough for eight or nine decent sized scones. Brush the top of the scones with milk and cook for fifteen minutes. Hopefully you will end up with something like this:- 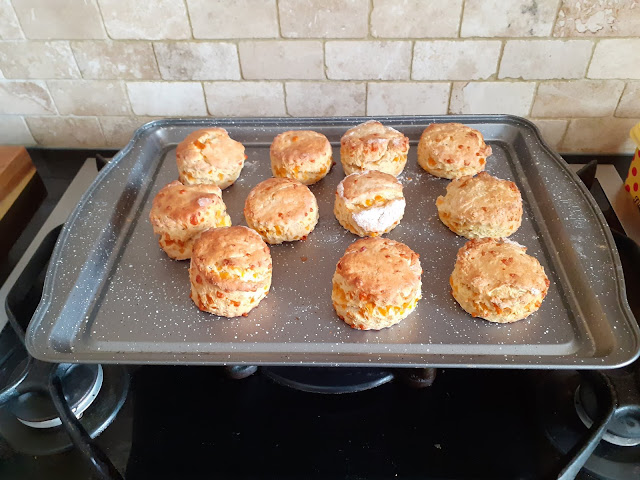 Tanks, tanks and more tanks...
Yep it's that time of year again folks where one retreats to the hobby room and dusts off the modelling knife. I mean a man has to have something to occupy his mind whilst she who must be obeyed is watching Strictly Dumb Prancing. I must admit I may have just gone a little overboard this year though and splashed out on a 1/16th Trumpeter kit of a Panzer IV. Given it took me two years to build a simple 1/35th scale Cromwell I reckon my grand childrens children will probably be finishing this for me.
To give some idea of the size of the thing the photograph below shows a comparison of the size the box a 1/16 scale Panzer IV comes in as opposed to a 1/35 scale Valentine. Yeah it's big. 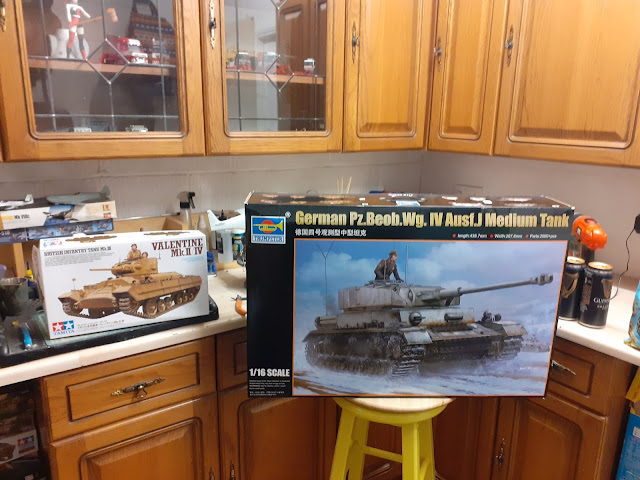 A week later I was back in the model shop on a mission to buy paint. Now I'm guessing there are a lot of modelers out there who know, as I do, paint has a lot to answer for. It's always the same you go with the intention of buying a fivers worth of paint and end up spending a fortune on a new kit which you then have to surreptitiously smuggle into the house. Only this time I got really carried away and forked out for a fully functional radio controlled Abrams M1. 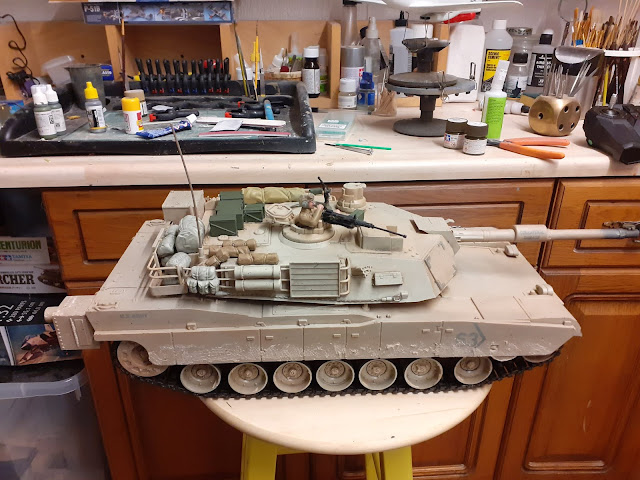 The question is, is it a toy or is it a model? Which is something I had been asking myself for the last eighteen months and the reason why I hadn't taken the plunge and got one before.After owning one for a week I would say it's somewhere in-between and chasing the cat around the garden certainly relieves some of the covid induced boredom. From a modelling perspective there is scope to play with the paint scheme and add weathering effects. As can be seen in the photo the tank comes with luggage and ammo boxes attached which I have already made a start on.
As a radio controlled vehicle the Tank mimic's the real thing very well. The tracks move in both directions and the tank will quite happily spin on its own axis. The turret turns a full 360 degrees at a realistic speed and the gun raises and lowers. It also fires air soft plastic BB rounds - once again no cat is safe. All in all it's a lot of fun, not as much as a model aeroplane, but there again I can't fly one of those from the back garden. I suppose the thing to do would be to get another then ones daughter and I could amuse ourselves with tank battles around the Rose beds.
There's always one...
Before I start on the Panzer IV I have to finish my current build which is a 1/32nd scale Revell Mustang. Now anybody who knows me will also know I love Mustangs. As far as I am concerned the P51 and Spitfire are the two most aesthetically pleasing military aircraft ever built. Only I'm beginning to despise this one. For some unknown reason it's fought me all the way. Why? Don't ask me the Revell kit is one of the best out there and what makes it even all the more galling is I've built it before. I suppose we all get them from time to time. It didn't help when I inadvertently sanded the gun shrouds flat on the port wing.
No matter I thought, I'll sand those on the starboard wing flat and instead of giving it a military paint scheme I'll give it a civilian one. Maybe make it a model of  an air racer. I wasn't binning it, kits cost far to much to do that these days. I've persevered in that vein, but it seems this is the kit which doesn't want to be built and I've ended up with horrendous gaps where there shouldn't have been. Once again God knows why, when I built this kit before it went together seamlessly. Still there's always one and it's been a while since I've had  something try my patience as much as this. 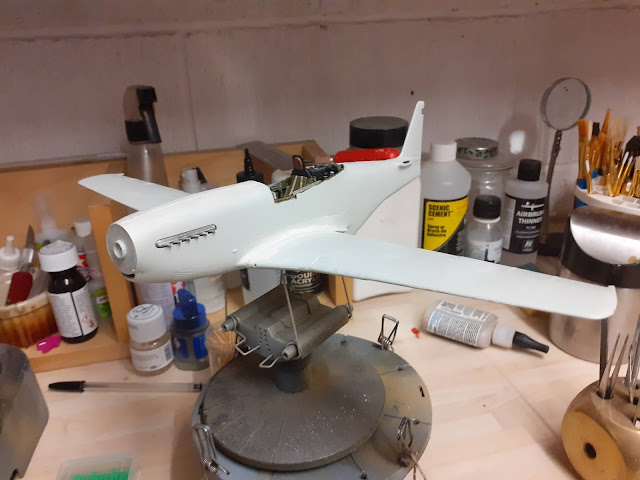 More filler than your average Morris Marina.
Anyway It's time to go, time stands still for no man as they say. I'll leave you with a  Romantic short story, of sorts...

Derby held out his hand to steady Joan as she negotiated a rickety old style. As he did so he looked out across the golden fields of wheat into the valley below. He had always loved this spot, not least because of the significance it held for both him and his wife.

“You alright my love?” He asked as she gingerly regained Terra Firma.

“Yes sweetheart and you?”

Derby nodded and turned back to the path which skirted the wheat field. It hadn’t changed much he thought since they last came this way some 30 odd years ago. He smiled to himself as the memories came flooding back. Joan was a real beauty in her youth with her long blonde hair and Sapphire blue eyes which were always smiling. It was what had attracted him to her in the first place, her smile.

He had been different back then, a virile young man with all of his life in front of him. He remembered how lucky he’d felt as he’d walked hand in hand with the prettiest girl in town. If only he could turn back time and they could be that young again. Even if it was only for an hour or so.

“I remember this spot, don’t you?” Joan said as they reached the corner of the field.

“How could I ever forget it,” Derby answered.

He turned to face her and before he had time to think about it his wife had her arms around him and was kissing him with a passion he had not felt for a very long time. He took a step back toward a fence and lent up against it.

“Why don’t you sit on my knee?” he asked as he kissed her back.

“Like I did the last time we were here?” Joan answered with a mischievous glint in her eye.

“Yes just like that,” Derby answered as he felt something start to stir below. Joan tugged at his belt and a moment or two later his trousers were around his ankles and she was sitting on top of him. They made mad passionate love with a wild physical abandon which literally took Joan’s breath away. When they had finished she gently stroked Derby’s head as he gradually regained his breath.