MISOGYNY & A LESSON IN LIFE

Today I read a piece on twitter by @Write2Fite  which struck a chord. So much so I  felt the need to put my own thoughts on the subject into words.

I was a child of the sixty's, born in 1964. I say this because the time frame is relevant to the content of this post. I suppose in a way my family background is also relevant. Looking back now I can see my parents contemporary views on life and the world they lived in must have come around despite of, and not because of their own upbringing's.

My father was an only child brought up by a single mother. His own father, my grandfather, being killed in the war. He grew up in a Durham pit village where it's safe to say attitudes toward life in the 1940's/50's were neither contemporary nor cosmopolitan.

My mother also lost her father in the war years, but for very different reasons. To say she endured a bleak and miserable childhood would be an understatement. Don't get me wrong, I loved the man I called grandad, but lets just say the sun didn't shine very often for my mum before she met my dad.

Really it's amazing mum turned out the way she did as  her step father, my grandad, was the epitome of Alf Garnet, the leading character  in the British sitcom Till Death Us Do Part. To this day I can remember mum telling me to treat all people as equals, regardless of race or whether they were male or female. "Treat people as you would wish them to treat you." Something Alf would never have said, that's for sure.

It was with these words of wisdom, and many of a similar ilk ringing in his ears, that a young Peter entered the school system in 1968. Like most kids I wasn't really aware of the trials and tribulations of life. I knew there was a war raging in a place called Vietnam, and remember being horrified at seeing images of children of a similar age running for their lives after a napalm attack. In the main though I was blissfully unaware of the fact the beliefs my mother and father had instilled into my brother and I weren't universally shared.

They weren't even shared throughout the village where we lived in Norfolk, England. Let alone the universe. It was actually something as simple as a game of football which brought this home to me and made me realize the world wasn't the level playing field I thought it was. To explain, this was all to do with attitudes and attitudes toward women in particular.

I'm guessing this "awakening" for want of a better word came about somewhere around 1974. My school at the time was both small and old. In my mind I can still see the date 1850 set in stone above it's front door. The playing field was exactly that, a small field which somebody occasionally ran a grass cutter over to keep it below knee length. There were no goal posts, no painted lines or sports apparatus of any kind. Just a field.

When it came to play times the ethos  was very much a "get on with it kids and use your imagination" type of thinking. Which we did, we fought the second world war, hunted dinosaurs, played catch and of course, a lot of football. It wasn't football as we know it though. There were no goal posts for a start, these would be improvised using school bags or clothing such as shirts or jumpers to mark the position of the posts. Team sizes were unlimited and it wasn't unusual to see most of the school facing off against one another. And here's the point, when I say the whole school I mean exactly that, girls as well as boys.

There wasn't a lot in the way of rules either from what I remember and it was verging on anarchy at times, but somehow we all lived to fight another day. During these frenetic matches a true talent shone through. For the sake of anonymity we'll call this talent Chris Edwards. Chris was a small wiry, freckle faced little boy. He lived close to me in the village and we were good friends. The thing about Chris was he lived and breathed football and he could play. Boy could he play. He used to run rings around the rest of us, including boys who were much older. They might have tried to use their size to muscle him out of the way, but more often than not he would spin the ball around them and be half way up the pitch leaving them lumbering in his wake.

Chris would go on to have a professional career, playing for clubs in London and further north. He wasn't the best player in the school though. There was another player who as much as Chris could run rings around us, could run rings around him. This player could also scythe through the seething mass of bodies as if they weren't there and score goals seemingly at will. This player was Chris's younger sister Ann.

Ann was a year younger than Chris and even smaller in stature. She was a quiet kid too, not very outgoing and happy in her own little world. A world she only came out of to kick a ball around the field with the rest of us hooligans. She was brilliant, and could do things with a ball us mere mortals couldn't have done in a hundred years. Nobody could play against her, except Chris and even then he had his work cut out. I suppose the two of them would have practiced together in their garden at home, so it would be only natural they would feed off one another and progress to a similar standard.

On a weekend Chris played for two or three different teams and his parents lavished all sorts of expensive coaching upon him. Ann on the other hand stayed at home and played with her dolls. It was something my tiny mind couldn't compute. Why was this so? Ann was the better player, without the expensive coaching, so surely shouldn't she and her brother be treated at the very least as equals?

One day I asked Mr Edwards why this was so. It was just an innocent question, but the answer was to have a profound effect on me which even today, some fifty years later I've never forgotten. It was a beautiful sunny day and the Edwards were busy loading Chris's sports bag into the back of their car. I can't remember whether he was going to play a match or going for a coaching lesson, but either way I asked why they weren't taking Ann. I can't recall the conversation word for word, but it went something like this:-

"Why don't you take Ann with you, she's a good footballer. Better than Chris."

Mr Edwards smiles at me as if I'm an innocent child who knows nothing of the world. Which I don't, but I'm about to learn.

"What difference does that make. Don't girls play football?"

Mr Edwards see's the confused look on my face and squats down in front of me so we're on the same level.

"It's different for girls Petey. Ann will grow up, get married and have children of her own. She won't have time to play football."

Now I'me guessing, looking back, we all have something, some situation in our childhoods when we knew something was wrong. Something which, owing to the innocence of youth, we couldn't put our fingers on, but we knew wasn't right. This was mine.

I think the overwhelming feeling at the time was one of being completely and utterly dumbfounded. Up until this point, in my short, sheltered life, I'd firmly believed in my parents doctrine all people were equal, regardless of sex.  So why was Mr Edwards telling me his daughter was in effect put on the planet to do nothing more than have babies.

Don't get me wrong the Edwards were a nice family and Mr Edwards didn't mean anything untoward. This was what he genuinely believed. Chris was going to have the career and Ann was going to get married and have a family. The thought she might be capable of doing so much more just wasn't there. I actually  broached the subject with Ann once, she just shrugged her shoulders and said "I'm a girl" as if that was all there was to it. Terrible really...

I don't know what happened to Ann, we moved away from Norfolk in 1975. As I've already mentioned Chris did achieve his (or his parents) goal of becoming a professional footballer. I'd like to think Ann had an equally fulfilling career in what ever chosen field she decided to go into. If she did,  it would very much be despite of her parents almost stone-age attitudes.

For me it was a lesson learned. The world wasn't a level playing field, far from it. Certainly my parents beliefs were light years away from reality. As I grew up this became more and more apparent. I would like to say it's got better over time and in some country's maybe it has. There are still too many though where misogyny is a way of life. In all innocence these countries might not see it that way, just as Mr Edwards didn't, but that's what it is.

It breaks my heart to think there are countless other "Ann's" around the world who will never be able to achieve their full potential. To get the chance to stand up and show the world what they are capable of. You can hide behind whatever reason you like, be it tradition or religion. I don't care. It's profoundly wrong. 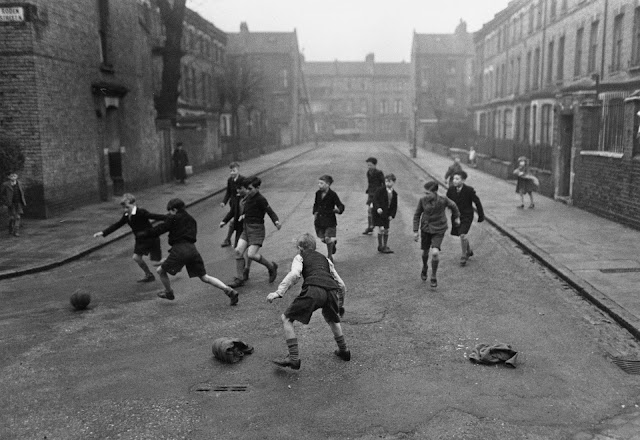