Covid blues and the pro's and con's of lock down

I wonder how many people have come to the conclusion there is more to life than the daily drudge of get up, go to work, come home, watch a couple of hours on TV, go to bed. Repeat... I know I certainly have. In many ways I think the Covid lock down has given us all pause to reflect. I suppose being under what is something akin to house arrest for five months does that. Certainly looking back over the last forty years I do wonder what I was thinking at times. Or not as the case may be.
I guess spending all my working life doing something which I fell into more by accident than design doesn't help. There again that's probably the same for most people. Remember them days when you were a kid and the teacher asked you what you wanted to do when you grew up? I think my answer was pilot or engine driver, which was what most young boys would have said in the late 60's or early 70's. Along with footballer of course. What ever my answer was I'm pretty sure it made no mention of working in transport.
Looking back at the stupidly long hours and weeks/ months without a day off I seriously wonder what was I thinking? It wasn't as if I was the one driving a Range Rover and living in a mansion. Don't get me wrong, it was fun at times and you would have to go a long way to find another job which could give you so much satisfaction, but there was also a lot of stress. When I first got married for example I was going to work at six in the morning and coming home at eight at night. In an eighteen month period I had the grand total of five days off. This included Sundays and the Christmas break. Fiona hardly ever saw me and I'm amazed we stayed married.
Fiona has always kept a diary of one sort or another and we were looking back through some of these the other day and all I can say is I must have been mad. I'd also be lying if a part of me didn't know deep down the stress and long hours must have been a contributing factor to my illness. In some ways I was probably my own worst enemy when it came to stress as to a certain extent I think I coped with it better than most. Outwardly at least, inwardly it might have been a different story.  Anyway its no good dwelling on such things, the past is the past. It's the future what matters. All I would say is if I had my time again I would without doubt try harder at school... 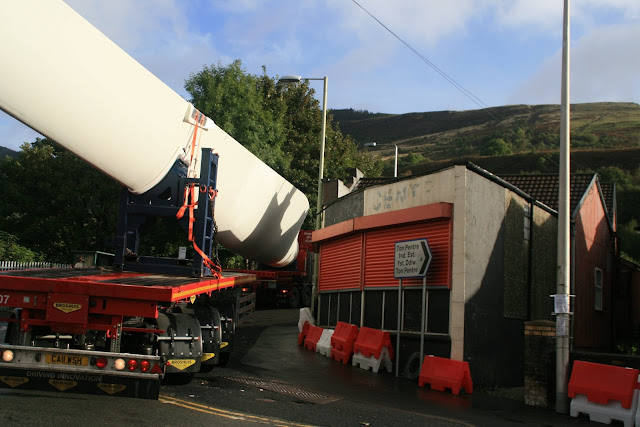 This is a 40 metre long wind turbine blade being reversed around a cross roads in a small village in South Wales. I was the one who put my name to it and said we would get around this corner as well as negotiating other challenging issues along the route. Believe me the stress levels were at an all time high up until the first one made the turn.
One thing which has come about as a result of the covid lock down is I never realised how much rubbish one household could generate. There are only three of us in our house and I wouldn't consider us to be a wasteful family. Even so I was shocked to see how quickly we filled up a full sized wheelie bin. I'm glad to say in my new role of house husband I have managed to reduce this and am now committed to doing my bit to save the planet.
Ironically Covid has played it's own part in this in that we don't make anywhere near as many trips to the supermarket and shop locally. This has meant we haven't used the car as much, which has obviously reduced emissions, but more importantly had meant a large reduction in the amount or pre-packed goods we buy. I now have a real aversion to anything wrapped in plastic.
Also because I now wander up the nearby high street with my old fashioned "grandma" shopping bags we don't accumulate anywhere near as many plastic bags. I would say on average I have reduced our weekly intake of plastic bags by at least five. Take that over a year and that's 260 plastic bags which were either going to end up in land fill or floating about the worlds oceans. Can you imagine what it would mean if  ten percent of the worlds population made a similar saving?
Strangely enough  shopping local and buying fresh meat and vegetables is also turning out cheaper than shopping in the supermarkets. Cheaper and healthier as the meat from the butcher was until recent, happily chewing grass in a meadow somewhere close by and not crossing the ocean in a refrigerated container.
All I need to do now is convince my daughter she doesn't need to drink Cola as if her life depends on it which will drastically reduce the number of plastic bottles in the recycling bin, and the world will be a happier place.
One area which has certainly benefited from lock down is the garden, something which I seem to be spending more and more time in. Other than a brief period of time between 2004 and 2009 the garden has always been something I didn't have a lot of time for. Indeed it is one of my biggest regrets that when we lived in Scotland we had a beautiful house and garden, neither of which I got the time to appreciate. I've probably spent more time in the garden here, in the last five months than I did in nine years in Scotland.
I must admit I've found tinkering about in the greenhouse quite therapeutic, especially from a mental health point of view. One of my most pleasant memories is of sitting out a rain shower in the greenhouse with little Scout by my feet. Its become quite a routine now and every morning once senior management has left for work, Scout and I make a tour of the estate. This usually involves a little bit of weeding and watering the plants both in the greenhouse and in pots on the patio.
In keeping with my new found "green" ethos I  planted some of our own veg, which wasn't easy as this garden doesn't lend itself to vegetable growing in the traditional manner. We now have Tomatoes and peppers in the greenhouse, along with a dozen strawberry plants in hanging baskets. I was going to grow these outside, but the Starlings around here are like Pterodactyls and would have stripped them bare.
Having been inspired by a gardening program on TV I built my own raised bed. Me being me I had to do this on the hottest two days of summer. Building the trough took a whole afternoon. Filling it with 450 litres of compost took two cans of beer and most of the following morning. It was worth it though, and it won't belong before we have our own lettuce, carrots and spring onions. 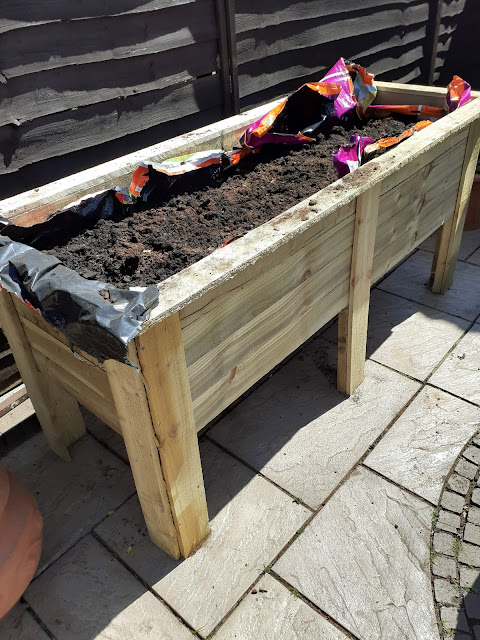 The raised bed the day it was finished. Not bad for a CSE grade 6 in wood work. 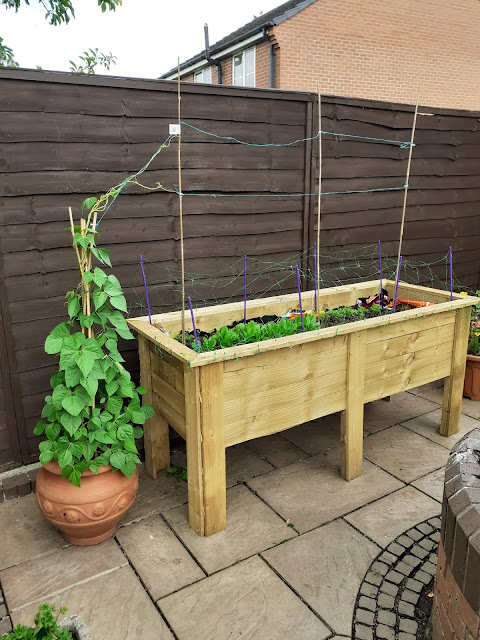 A month later and everything's starting to come through nicely. 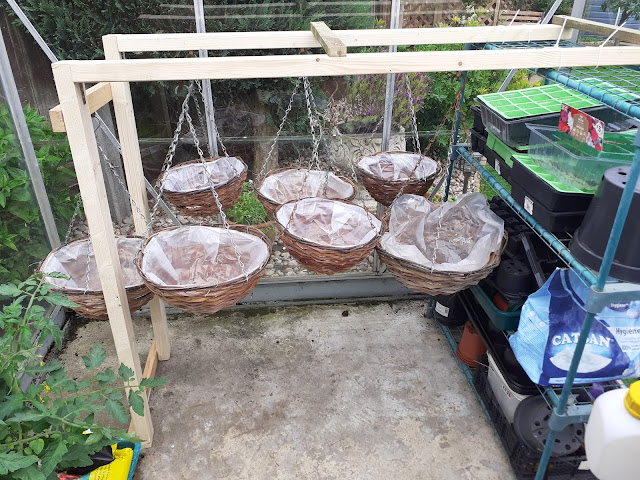 My makeshift strawberry hanger. We normally have hanging baskets on the front of the house, but owing to Covid catching us on the hop missed out this year. At least the baskets are getting put to use now. 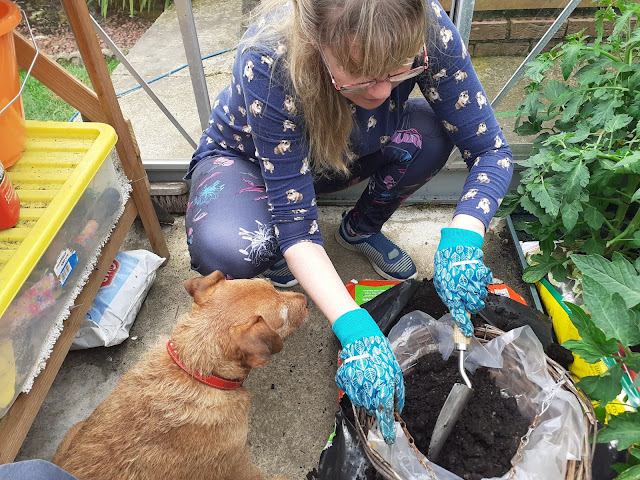 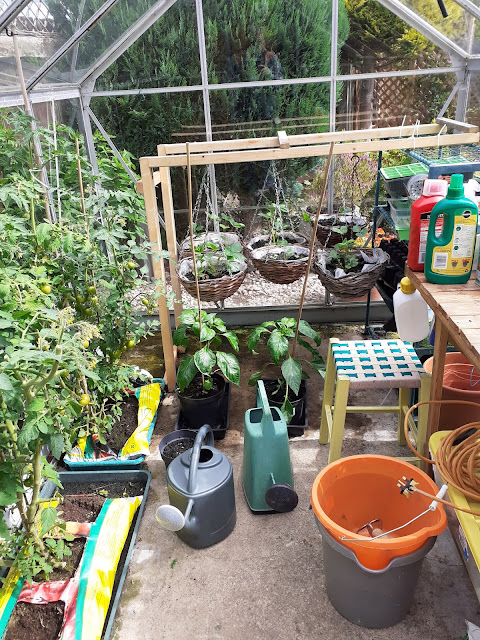 A month later and the strawberry plants are flying. The stool in the picture used to belong to my Grandmother and I can remember sitting on it in her kitchen when I was about five years old.
All I can say is thank god we have a garden. It's not the biggest by any means, but at least there's been somewhere to escape too. I wouldn't like to have been self isolating within the confines of a small flat, that's for sure.
Anyway I hope this has been of some interest. Putting my thoughts down on paper has certainly made me see things a bit clearer.
Peter B August 2020 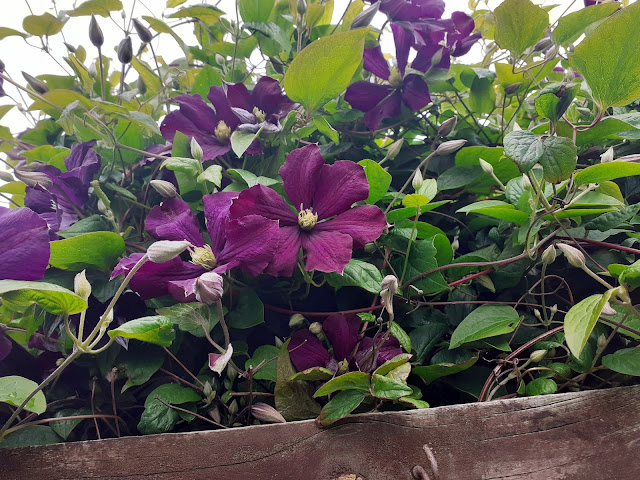