Last Monday the light of my life went back to work and I became something I never, ever envisaged being, a househusband. How long this is for I don't know as at the time of writing we are in the clutches of the Corona Virus Pandemic and I am in the high risk group. This means I have virtually been a prisoner in my own home since the 1st of March.
The one thing I couldn't do is sit idle  and expect my wife to start cooking and cleaning once she returned home  so overnight the domestic chore baton was passed to me. Not that I was bothered, I mean how hard could it be?
Lets just say expectations were high once I'd waved my dearly beloved goodbye and closed the front door. We don't live in a big house, its just a two bedroom bungalow with a relatively small garden, it wasn't as if I had a mansion to look after. There are however a number of players/factors to take into account which are as follows:-
1) My long suffering wife Fiona who likes things done her own way and doesn't really have control freak type tendencies.
2) My daughter Kirsty who is rarely seen in daylight and generally only communicates using a series of grunts or eye rolling gestures.
3) Jasper the larger of our two dogs. He is a Rottweiler/Pointer cross, a gentle giant who's only vice is he has a habit of spewing his guts up with an annoying regularity.
4) Scout April aka the Ginger Ninja. Scout is a Lakeland/Patterdale Terrier cross and is as cute as a button. She is also a recalcitrant, willful little shit who does what she wants, when she wants.
5) Merlin the cat, aka The Prey. Merlin is a ten year old cat who can't do anything quietly and is constantly yowling his head off. Not a good idea when Scout is trying to sleep .
The first revelation of the day was clothes don't Iron themselves, nor do they fold themselves up or put themselves away which was a bit of a bastard. I must admit I find it hard to believe we had the ingenuity to put a man on the moon in 1969 and now, some fifty years later we are still having to iron clothes. Unbelievable. For some inexplicable reason she who must be obeyed had given me explicit orders not to iron any of her, or my daughter clothes.
"You can do your shirts, but don't touch anything else." Such was the vote of confidence. 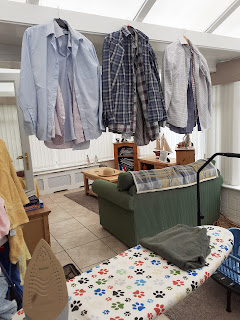 After 56 years on the planet I am proud to present my first ever attempt at ironing.
I'd just finished the ironing when my daughter made a rare daytime appearance and laughingly informed me the grass didn't cut itself either. Fortunately we only have a small lawn and it didn't take too long and with a bit of artful patching no one will ever notice where I scalped the surface with the lawn mower.
To be fair the lawnmower and I pretty quickly came to a mutual understanding, which is more than can be said for the poxed hoover. What an awkward bastard, one minute it was quite happy to suck away, the next it didn't want to know. Hmm sounds familiar... I'm guessing the French say la hoover giving it a feminine denomination as opposed to le hoover which would be male. My wife has an unenviable reputation when it comes to killing hoovers and by the time I'd finished the last room  I could see why.
Come four o'clock however, I was feeling pretty pleased with myself and had completed all of senior managements directives. I even had a Shepherds Pie in the oven and had just sat down with a cup of tea when Jasper walked in, looked me straight in the eye and spewed up. He then about faced and went back to sunning himself in the garden. There were no words. 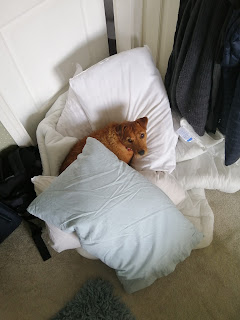 Scout assisting with bed making duties.
Joking aside I am quite enjoying pottering around the house and garden, particularly the garden, which although not overly big has plenty going on. There's a lawn, flower beds, patio and greenhouse. Certainly enough to keep me happy even if I haven't a clue what I'm doing. It's funny really, my mother and wife are both good gardeners, me not so much. I suppose this can be summed up with my four point classification of the worlds flowers which is as follows:-
Needless to say once again I have strict orders not to touch half of the garden, which like all husbands I will obviously obey to the letter. Rather worryingly I went and ordered a load of planters and vegetable thingy's with the intention of growing some of our own fruit and veg. It wasn't just my daughter who rolled her eyes when I made this public knowledge at the dinner table.