Of cats and dogs.

It's fair to say Scout, our Patterdale/Lakeland cross is not a morning person. During the week she gets up with her mum, stumbles through into the front room and buries her head behind a cushion on the settee. Any attempt to remove either the said cushion or terrier will elicit a menacing growl and/or a series of razor sharp teeth. Needless to say everyone gives her a wide berth until she comes too somewhere around ten o'clock. Every one save the damned cat that is.
After three years you would think Merlin would have learned not to antagonize the Ginger Ninja, but no. Take this morning for example, one had just sat down with a cup of tea and was about to start reading Michael Connelly's latest book when the cat decided to put in an appearance. Now the thing with Merlin is he can't do anything quietly and is constantly mewling and yowling at all and sundry. It's not a pleasant yowl either and can be quite mournful at times. Some people think it's  quaint we have a talking Cat, which it can be, but there's a time and a place and three foot from a sleeping Scout April isn't it.
Merlin seemed blissfully unaware of the danger however, and proceeded to try and engage me in conversation which went something like this.
"Yowl."
"Hello Merlin."
"Yowl."
"What?" As if it's ever going to tell me.
"Yowl."
It was at this point I noticed two small, ginger ears pricking up and swiveling in Merlin's direction. This, for those who aren't in the know, is akin to an F16's attack radar searching for it's next target.
"Be quiet Merlin."
"Yowl."
One eye is open now and its safe to say the target is acquired.
"Merlin son, you need to shut up."
"Yowl."
Both eyes are open. We have full radar lock and missile launch is imminent. I started to lean forward in order to scoop the feckless cat up out of harms way, but it was too late and there was a flash of black and ginger as the cat and dog made a rapid 360 around the sofa. A split second later the cat scorched past my feet in full re-heat with the ginger missile firmly locked on its tail. There's a frantic moment as paws fight desperately for traction on the kitchen floor followed by a da-dump -bang as the cat exits through the cat flap a split second before the dog impacts with the door.
From across the room Jasper looks at me with his big brown eyes. I know exactly what he's thinking. One day the cat is going to be a little bit too slow, or even worse I'm going to forget to unlock the cat flap. Either way its not going to end well for our feline friend. 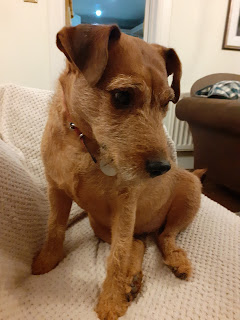