The last week or so could probably be best described as a period of adjustment. It was certainly difficult at first, waving the wife off to work and then starting on the housework. It wasn't the work itself, I'm not bothered about that, it was more wrapping my head around the fact my wife is now the major bread winner and I'm the stay at home house husband. No doubt there will be people reading this who will think that sounds a bit sexist, but it's not meant to be. I suppose it comes of being a stereotypical child of the sixties and growing up with what are probably now seen as dated family values. I'm coming around now though and Fiona, my wife says she is enjoying her job and getting out and meeting people. So every cloud as they say...
On the upside I'm coming to get to know and understand the house I'm living in which may sound an odd thing to say. Once again this goes back to my previous life style which was very much work orientated. Or a combination of work/subsequent illness. For a long period of my life I worked long hours, very often for seven days a week. These were often stressful hours. Especially when  I lived and worked in Scotland. At the time we had a beautiful sandstone house in the Clyde valley. Both my wife and I loved it very much, it was over a hundred years old and full of character. Surrounding the house was an extensive garden which was over an acre. Sited close to the Falls of Clyde nature reserve it was everything we ever wanted.
The sad fact was I never got to enjoy the place, I was always working and quite often away for long periods of time. This left Fiona trying to maintain a 110 year old house, with all of what that involves, and a huge garden. Nine times out of ten when I was home I was too tired to do anything. On reflection we got our dream home ten years too late. Anyway to cut a long story short we moved back to the north of England at the end of 2017.
Our new house is very different and is a modern two bed room bungalow which was purposefully built by the previous owner with his retirement in mind. It was perfect for us, and me with my condition in particular as the guy had thought of everything. Strangely enough I was born two streets away so you could say I've come full circle back to where I came from. Another coincidental twist of fate is the fact  my family came from here and have either died off or moved away. In the interim however, my wife's family who hail from Yorkshire, all moved here.
Anyway in my usual manner I have digressed. The point is for the first time in a lot of years I'm getting to know where I live. Take the kitchen sink for example. In the two years we've lived here I didn't know one half of it wasn't plumbed in properly and leaked. The sink itself is a double with a waste disposal unit under the smaller of the two. This had never worked since day one so yours truly bravely decided to fix it.
On closer inspection one thing that hit me was the fact water doesn't as a rule flow uphill, but that was what it was expected to do here. Also there were tell tale signs of silicone around the pipe joints. Hmm...who do I know who has the firm belief anything in the world can be fixed with silicone? Or if not silicone two bits of wood and a nail. It's all you need apparently.
With a heartfelt sigh I got to work, ably supervised by "Captain silicone" of course. The pipe work didn't need much sorting out and my original idea was to do away with the waste disposal unit altogether. After a little research on the internet however, I found the company who made it still existed and their current model looked almost identical. Ninety quid later we had one in the kitchen and joy of joys the fittings were exactly the same. Now I aren't going to go into detail about how I fitted it, but amongst other things a car jack may have been involved. 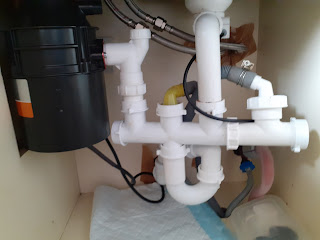 All my own work and not a drop of silicone in sight.
Having passed that test the house decided to send me another in the form of the conservatory roof. This one was far more alarming as somebody could well have been hurt. This came about when a board which runs under the eave of one half of the conservatory came "unglued" at one end and fell down. Fortunately the light fixture prevented it from completely coming off, but the whole thing was dangling precariously above everyone's heads.
On closer inspection the wooden board seemed to have been attached to the wall using silicone (God, I hate that stuff). Naturally we spent the first ten minutes in headless chicken mode, but eventually order returned and it was time to delve into my store to see if there was anything suitable with which to fix the offending article. Fortunately, and don't ask me why, I had kept some L shaped brackets of the type Ikea provide for attaching tall furniture to the wall. I can't actually remember what these ones came off as they are a bit more heavy duty than the Ikea type, but they were perfect for the task in hand.
Twenty minutes later after been shown the proper way to use a step ladder I had the bracket fixed to the wall and the underside of the board. One thing is for certain it won't go anywhere now. 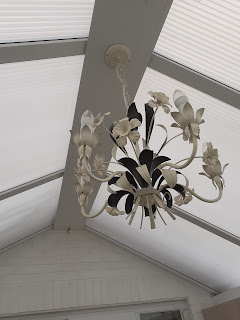 The board under the eaves which would have fallen down if it weren't for the light bracket holding it on. 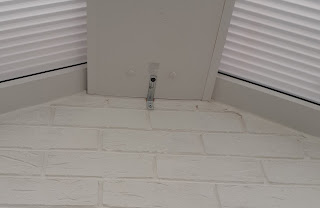 My homemade support. I don't know how anyone could have expected silicone to hold something as heavy up.
The point to all of this is at least I'm getting time to get around the house and get on top of various little jobs which would otherwise get left to get worse. It's time to go now, will add more later.