I don't know how anybody else feels when they get to the final editing stage, but suddenly for me it all looks a bit daunting. By this I mean in the very near future I'm going to be faced with sending the manuscript for my novel, A ghost in time, to literary agents and publishers in the hope somebody will pick it up. I suppose to a certain degree it's fear of the unknown, I'v never done this before and to be perfectly honest haven't a bloody clue how to go about it.
It's something I'm going to have to learn/overcome though, I haven't come this far to fall at the last hurdle. There's been four years hard work gone into this which comprises of six drafts, the fourth of which was a complete and utter re-write. The whole experience has taken me through a whole host of emotions, frustration, anticipation, happiness to name but three. Lately though there's been another over-riding feeling, one of pride. Pride that I stuck with it and stayed the course.
There's been a lot of happy memories too, such as sitting in the car in what was Atlantic Street car park in Glasgow at six AM writing in a snow storm, or in the kitchen of our holiday cottage in Wasdale. Then there was the time when I was writing in a restaurant and realized somebody was reading over my shoulder and I ended up spending a pleasant evening with a former American politician and his wife. Really there are so many memories which are evoked every time I re-read the text it's sometimes like re-living a stage of my life. 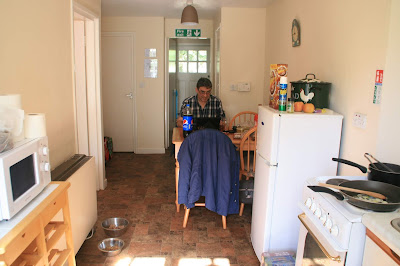 The present state of play is the story has recently been Beta read by Dutch writer Esther van den Heuvel who gave me some invaluable feedback, it is also currently in the hands of The Spun Yarn, an American beta reading service who also provide in depth analysis and feedback. In addition I have sent it out to four friends and family members. Hopefully this will not only give me feedback on the story itself, but also some idea of where to pitch it as the one problem I have is it doesn't fit neatly into any one genre.
I suppose it's a case of one step at a time, and for the moment I'll have to wait until everyone comes back, but I intend to have the manuscript sent out no later than the end of July. My mother is 80 this year and it is her one and only wish to see one of my stories published, so if for no other reason I have to do it for her.