Modelling or muddling through lock down.


As well as writing my other hobby is building Scale Models. This came about as a result of my Sarcoidosis condition which effectively ended what up until then had been an active life. In many ways the two hobbies complement one another and I often write about the models I am building. I also research the history of the subject matter such as my current project a World War Two Valentine tank. It can be quite therapeutic at times and on those occasions when I have had writers block has proved to be a good way to get the mind back into gear on a neutral subject.
My first models were either 1/72nd scale aircraft or 1/76th scale Armour (tanks) as well as a small Diorama which I called On Manouvres. At the time I started this with no little faith and fully expected it to end up in the scrap bin. Contrary to my lowly expectations however, it didn't turn out too bad. It was nothing difficult it had to be said and depicted a dirt track running alongside a stretch of railway embankment, but at the same time it gave me hope there was an alternative life to the one I'd been leading up until that point. In effect as a result of my illness I swapped a pair of cycling shoes and walking boots for a pen and modelling knife. 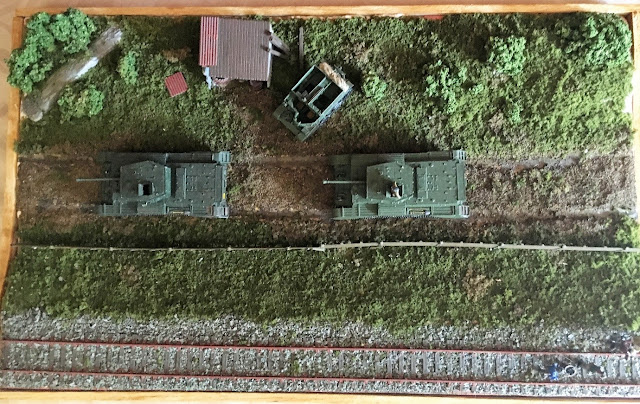 On Manouvres  with two Cromwell's and a Universal Carrier.

Roll the clock forward to 2020 and the Corona pandemic. It's now the 18th of May and I have been in lock down/self isolation  since the first of March. I think it's fair to say if it weren't for my writing and model making I would have turned into a gibbering idiot weeks ago. True, I sometimes annoy the neighbors with my guitars, but in the main if it weren't for these two hobbies I would have been driven mad staring at nothing but an endless parade of quiz and antique programmes on the TV.
Rather worryingly the only way I knew it was Saturday last weekend was because there was no Bargain Hunt at 12.15. Anyway, not for the first time I digress. Normally  I have a very relaxed approach to my modelling and do a bit here, and a bit there when it suits. I have a Tamiya 1/35th scale Cromwell Tank which took two years to complete for example. Consequently I don't have a big collection, but boy how it's grown over the last two months. In this period I've added a 1/48th Scale Hawker Tempest, a 1/48th scale Hawker Typhoon and a 1/32nd Scale Supermarine Spitfire. In addition the Valentine tank which I am currently working on is nearing completion.
All four builds have been very different and each one has it's own motivation regarding subject matter. The Tempest is modeled on the personal aircraft of one of my boyhood heroes, French ace Pierre Closterman who's books I read from cover to cover when I was a young boy. The Valentine Tank fought throughout the African campaigns and would have been a familiar sight to my grandfather in places such as El-Alemein and Tobruk. Such  connections only serve to make the hobby more interesting and enjoyable. 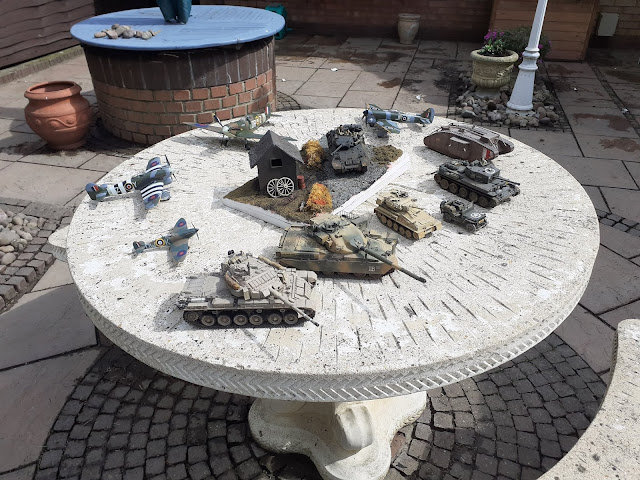 A selection of my model collection.

I'll post some more of my modelling efforts here along with some of the History of the men and machines they represent.