First of all welcome to my blog. It's been something I'v been going to do for a while now and like most things have been putting off. I suppose I can thank Covid19 for presenting me with more time than I know what to do with in that respect. The reasons why I started this blog are as follows:-

I'm not going to go into the symptoms of Sarcoidosis, but for those that are interested all of the relevant information can be found on  Wikepedia @ https://en.wikipedia.org/wiki/Sarcoidosis.
In brief though its a rare condition which attacks organs such as the lungs, liver or brain. In my case I have it in my lungs and went from being a fit and healthy fifty something to an eighty year old man almost over night. Well I say overnight, it was actually nearer two years, but I didn't know it at the time. During this period I was suffering from "brain fades" and chest pains which had the local doctors stumped. What didn't help was I had a stressful job and worked long hours which "muddied" the waters as far as the symptoms were concerned.


Everything came to a head in 2016 when I went to hospital with chest pains. This wasn't the first time, but this time the duty doctor saw something in my chest and after some scans and a biopsy I was diagnosed with Sarcoid. It's fair to say 2016 and 17 were the worse years of my life, not just because of Sarcoid, but also because of what went on with where I worked. There will be no mention of the latter in this blog, nor will there be any mention of trucks in general. Just in case anyone who knows me gets curious and decides to take a look.
I was at my lowest was when I was sat on my settee looking at my two dogs and couldn't for the life of me remember their names. It was as if my mind was paralyzed and for a little while the future was looking bleak to say the least. This was when I wrote a short poem called The Darkness which pretty much summed up how I was feeling at the time. It was nothing special, but has always meant a lot to me as this was the point where I hit rock bottom and started to bounce back up.
Not long after this my brother came to visit and gave me two or three Airfix model kits to build as part of my convalescence, something which I can never thank him enough for. The last time I built one of these kits I was about twelve and I was a little dubious to say the least. When I actually sat down and started putting the first kit together I found the whole experience quite therapeutic. Taking things one step further I started researching the History of the subjects and writing about them, solely for my own amusement. Although I do pester my brother with these from time to time.
Over time I realized when the brain fades and the horrible soul sapping feelings of exhaustion overtook me the best ways to cope with them was to write or sit down and work on a model. Or even better combine the two.
Prior to Sarcoid I lived a very active outdoor life and  and was a keen cyclist and hill walker and it was a big adjustment coming to terms with the fact I was never going to be able to do these on the same level. Fortunately I had my writing to turn to and over the last three years have written prodigiously, including a novel, which is dangerously close to being sent off to prospective agents/publishers. Something I haven't a clue how to go about and am finding a little daunting, which brings me to my current dilemma - writing a synopsis.
If anyone had told me how hard this was prior to having a go myself I would have laughed in their face. She who must be obeyed suggested looking on the internet for examples/suggestions and after reading half a dozen conflicting articles my brain is now well and truly fried. Maybe it will look a bit better in the morning...


I suppose it's only fitting to start with a copy of The Darkness as this was the turning point when I started to get my brain back into gear. 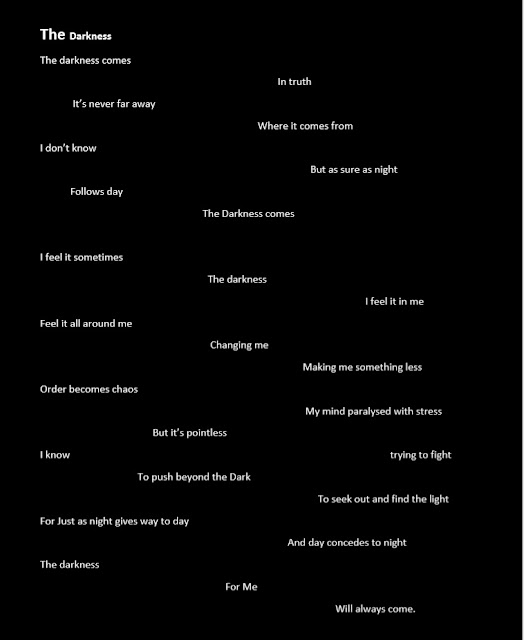