A month after aborting our Westgate to Stanhope section of the Weardale Way in Rookhope we were back, and what a day to be back it was. The sky was blue and the air had that fresh crisp feeling it gets when  the first frost of the winter is just around the corner. As mentioned, on our previous foray into Weardale Scout and I bailed at Rookhope owing to number one dog hyper ventilating for a prolonged period of time.
It was good to be back though. and although the primary goal of the days mission was to walk the Weardale Way from Rookhope to Stanhope we were also making an initial two mile diversion to visit the Rookhope Arch. The Rookhope arch being all that remains of a six arch viaduct which once carried a horizontal chimney originating at  the nearby Lintzgarth smelter and running for something like two miles to vent via a vertical chimney on Redburn Common. I'm not going to go into too much detail here as this is article is primarily about the Weardale Way and instead will leave it the subject for a later date. 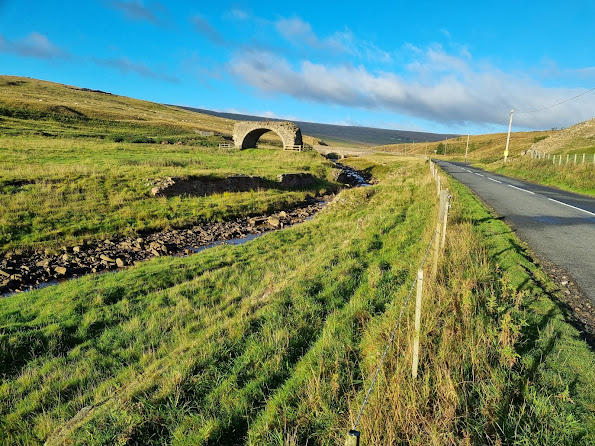 The Rookhope Arch, all that remains of a six arch viaduct which once spanned the burn.
Getting off the bus in Rookhope village centre it's hard to imagine what a hive of industry it must have once been. For more than two hundred years Lead  and Fluorspar were mined from the surrounding hills, the last mine closing as recently as 1999. As previously mentioned a mile to the north was the Lintzgarth smelter where the mineral bearing ore was brought from the mines to be smelted. Then there was the railway built to transport limestone and iron ore from the quarries above Westgate to markets further afield. Without a doubt I don't think the air would have been as clean, quiet and still as it is today. 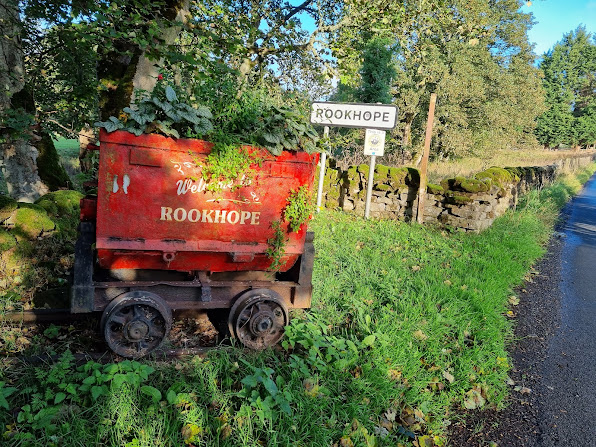 A reminder of Rookhope's industrial past above, & the village war memorial below, which as well as listing those that fell, lists those that served and returned, something you don't often see. 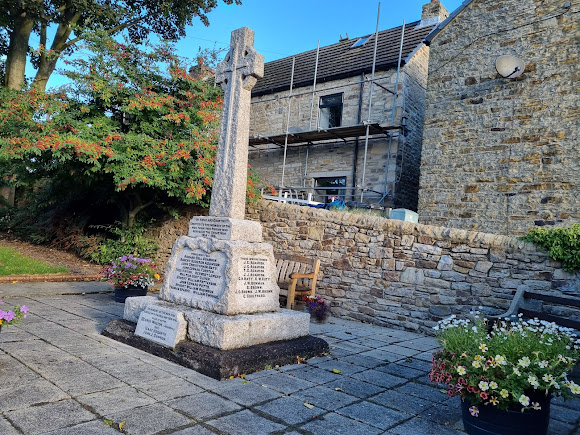 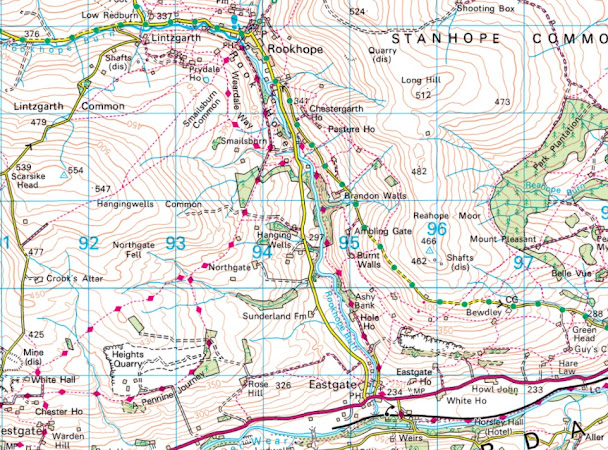 The Weardale Way travels south from Rookhope to Eastgate, initially following the main road for a little under a mile where it makes a left turn via a wooden style and footbridge onto the eastern banks of Rookhope Burn. I have to say one advantage of taking the bus from Stanhope To Rookhope is the walk back is predominantly downhill. Couple this with a beautiful, glad to be alive morning and there wasn't anywhere in the world I would have rather been. 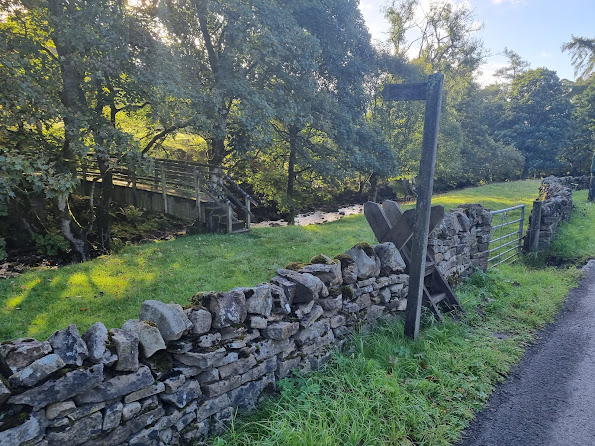 Once over the burn the path makes a right turn and passes through some beautiful countryside as it follows the burn down hill toward Eastgate. Once again it's not long before evidence of the valleys industrial past is all around, even the path itself seemed to be following a former track bed at one point. 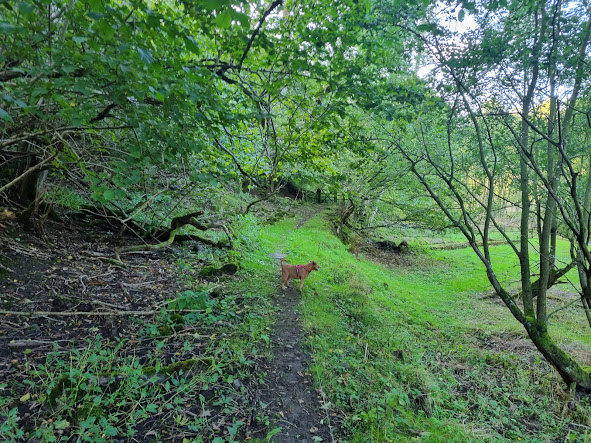 Was this a former track bed  in the picture above? A little further on we passed the remnants of a long defunct mining operation (possible lime kilns?) so I think there was a fair chance it may have been. 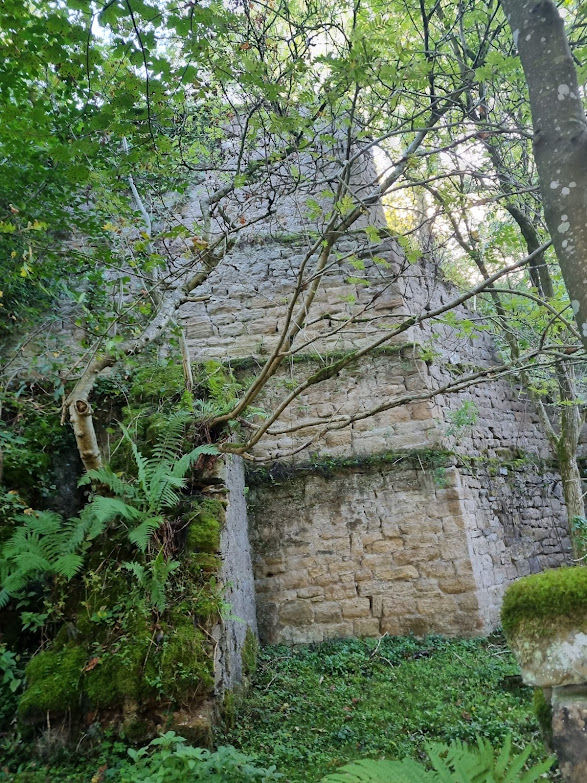 Either way from an historical interest point of view the walk was exceeding all expectations and one could have very easily spent all day investigating the old workings. Time however, was not on our side and we had to press on regardless. If I was being honest when it comes to the subject of the footpath unloved and little used are two phrases which spring to mind  and there was more than one occasion where I had to pick my way around fallen trees which blocked the path. Don't let this put you off though, this is a beautifully interesting walk and  given it's potential such a shame it's as underused as it obviously is. 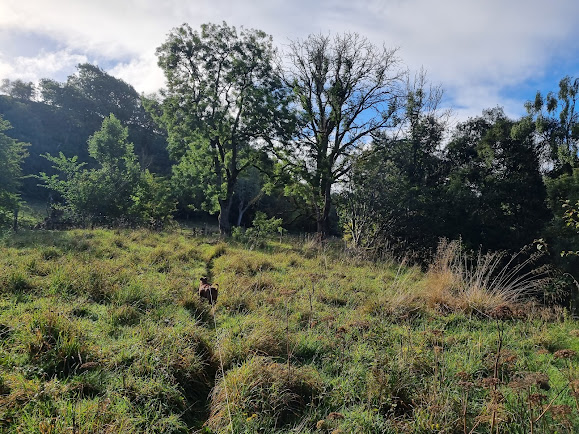 The path below Ambling Gate Bank.  At least the hole in the footbridge floor allows you to see if there are any trolls hiding beneath. 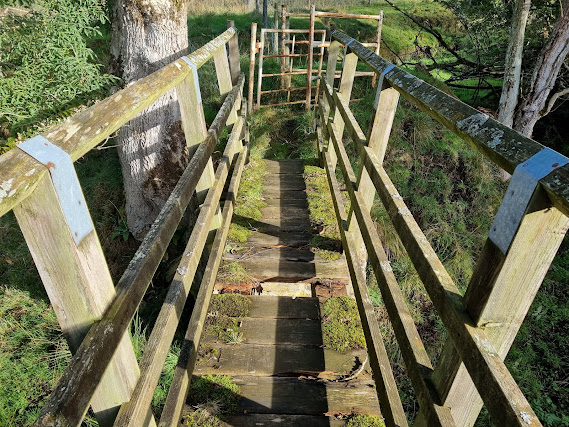 Eventually the path bears away from Rookhope Burn and climbs the hillside to join a metaled road near Hole House. It then follows this road to the picturesque village of Eastgate. 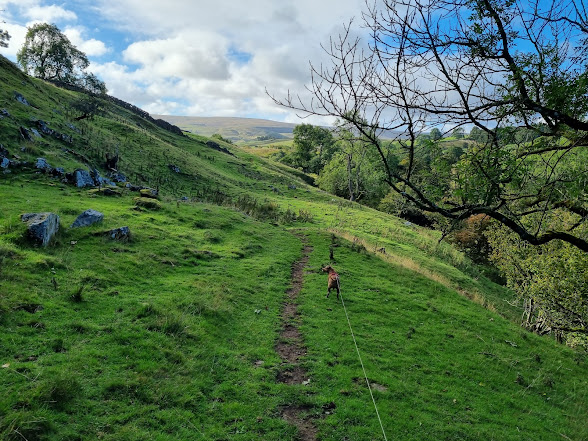 Scout April climbing one of the few up hill sections with the splendour of Weardale in the back ground.
Eastgate
Prior to this walk if you asked me what first came into my mind as to regards the village of Eastgate I would have said the former cement works on the southern banks of the river Wear. Sad I know, but the company I worked for often transported heavy mining equipment such as crushers and dump trucks to and from the site. Owing to two unexpected pleasant surprises however, the answer would be very different if you asked me the same question today.
These two surprises came in very short order, one being ancestral and the other historical, and I shall recount them in the order they came, which is ancestral first.
The Weardale Way approaches Eastgate from the north via a narrow country lane and the first thing you are aware of are two very nice churches or chapels reminding one of the important part of every day life religion once played in these parts, or indeed still does. The first of these is All Saints which appears to be Church of England and still in use. 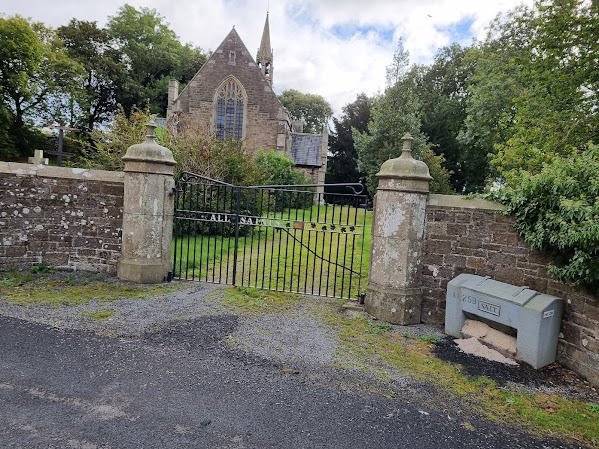 The second church, which was in fact a Wesleyan chapel, is a church no more and is now a residential dwelling. What caught my eye however was the legend Cuthbert Bainbridge Memorial Wesleyan Chapel above the door which immediately rang a bell.  A few minutes, and a little googling on my phone later, and I now knew I was looking at a chapel built in memory of one of my distant ancestors. To explain the Chapel was built by Cuthbert's son Emerson Muschamp Bainbridge in his memory in 1891. Emerson being one of two brothers who founded one of the first ever department stores in Newcastle in 1838. These guys were richer than God and over the years the store flourished until it was eventually taken over by John Lewis in the 1950's. Unfortunately for my side of the family one  of our ancestors decided to denounce his worldly goods, give everything he owned to the church and become a missionary in far flung lands. There are no words... 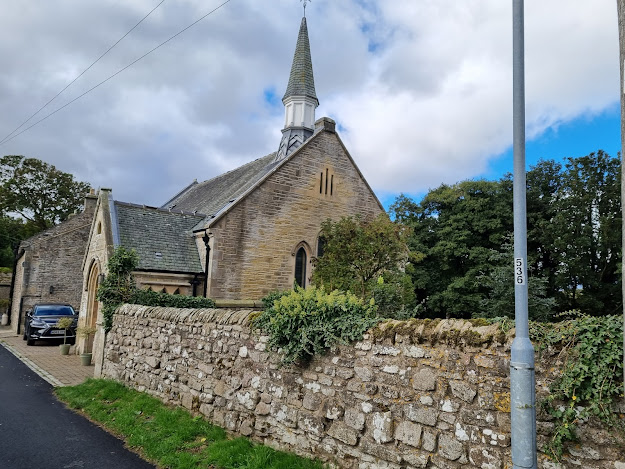 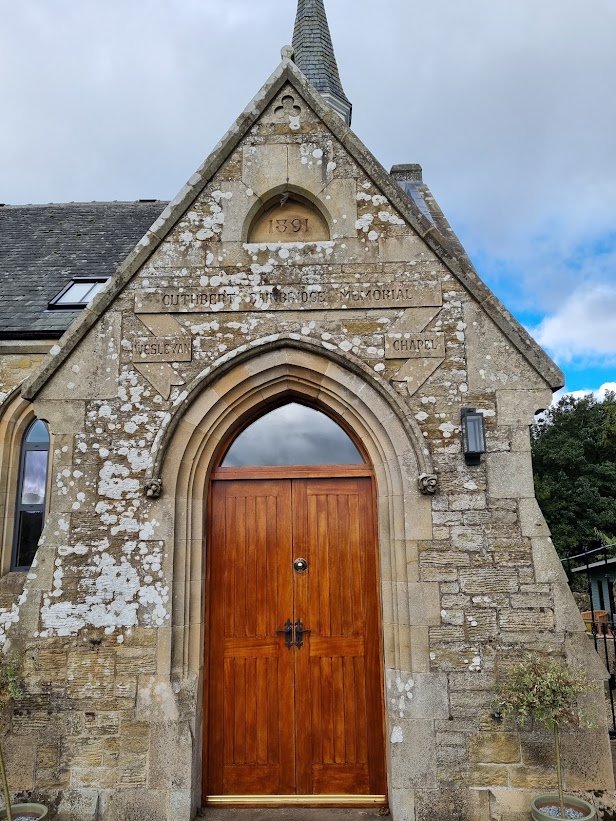 The second pleasant surprise followed roughly fifty yards past the chapel at the point where the Weardale Way meets the main A689. This was in the shape of a Roman Alter dedicated to the god Silvanus by one Marcus Aurelius Quirinus. As the information board beside it attests, there was a prefect by the same name serving as prefect with Cohors 1 Lingonum (1st Cohort of Lingones) at nearby Lanchester (Longovicium). This was especially interesting to me as ever since I was a boy I have had an interest in Roman History. Indeed I remember reading about this alter and it's dedication in the dim distant past, and although I knew it was in Weardale I didn't know it was in Eastgate. 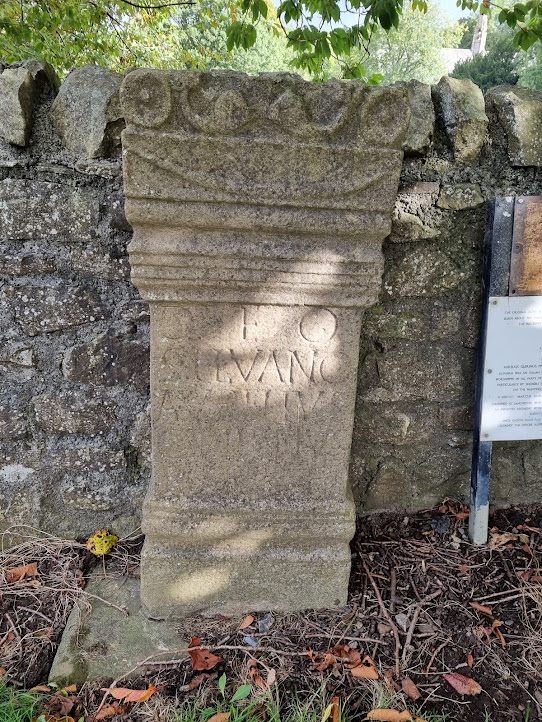 The Roman alter dedicated to the God Silvanus situated next to the A689 at Eastgate. 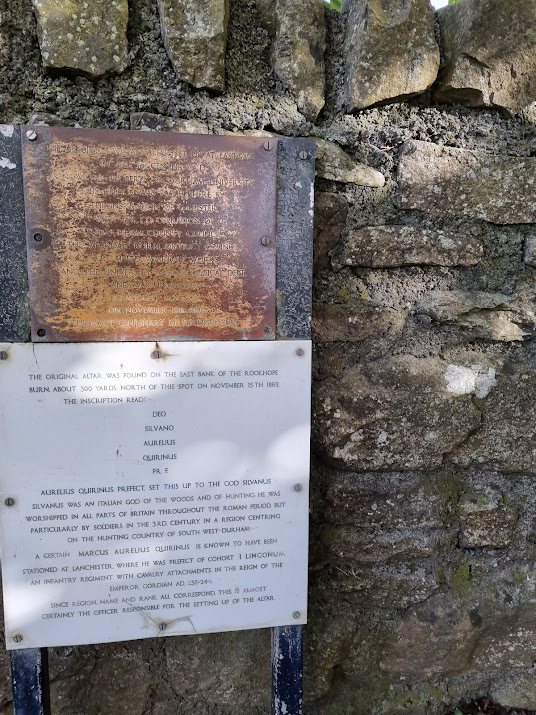 The landscape from Eastgate to Stanhope is far more open than it was from Rookhope. This part of the walk is in what I would call Weardale proper and after crossing the A689 the WDW makes a right turn up a road leading toward Hag Bank and the river/railway. 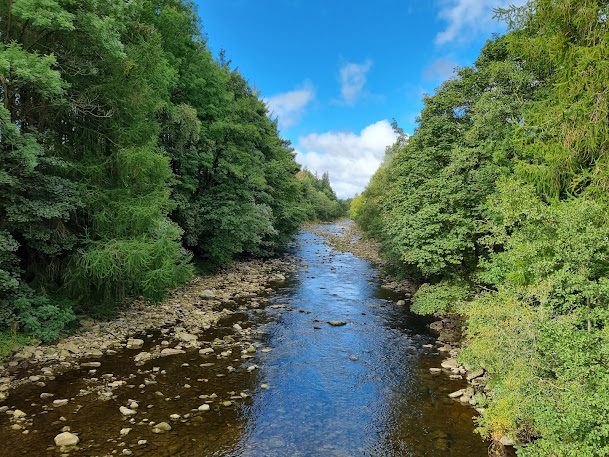 1st view of the River Wear from Hag Bank Bridge. The Weardale way actually turns left through a Caravan site immediately prior to the bridge ,(between the River and Railway) so if you cross it you have gone too far. Once through the caravan park the path which is somewhat narrow and overgrown, sticks to the northern bank of the Wear all the way to Stanhope. When I say overgrown you will see what I mean in the following two pictures and I could only imagine what this must have been like in the height of summer. 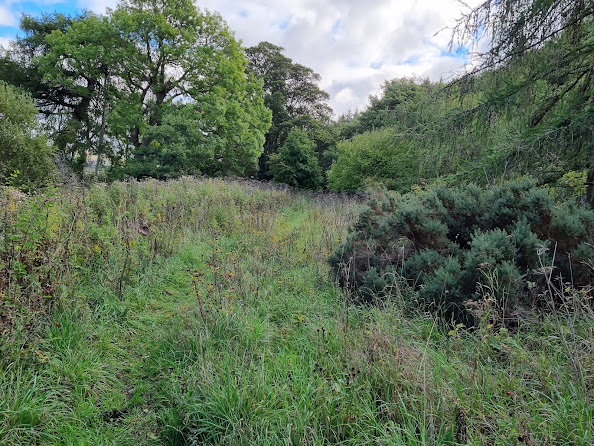 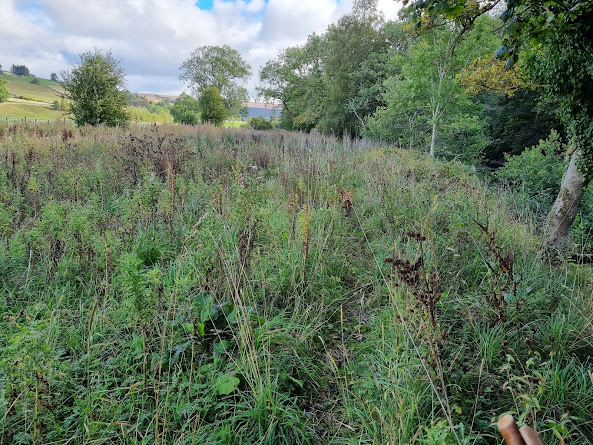 Even though it was hard going underfoot the walk was still rewarding with many fine views of the river and surrounding countryside. The overgrown path doesn't last forever and eventually we found ourselves enjoying the sunshine in open fields. 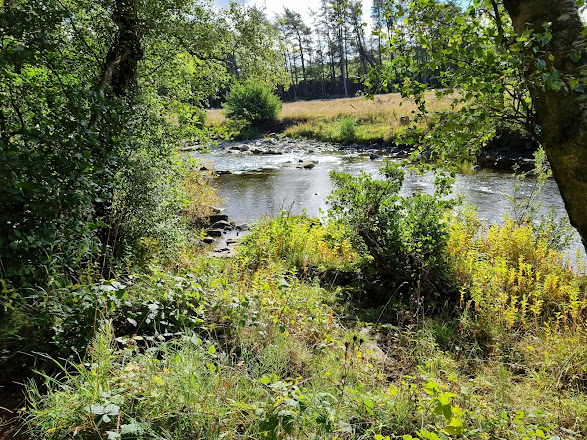 The industrial landscape also started to change and after crossing the railway close to Stanhope Bridge I was aware of a former stone Quarry on my left hand side. On inspecting the map I learned this was Greenfoot Quarry which is now a site of specific scientific interest owing to an exposure of the Little Whin Sill. a tabular layer of igneous rock. Whatever it is I found it's dark, morose waters creeping me out and quickly moved on. 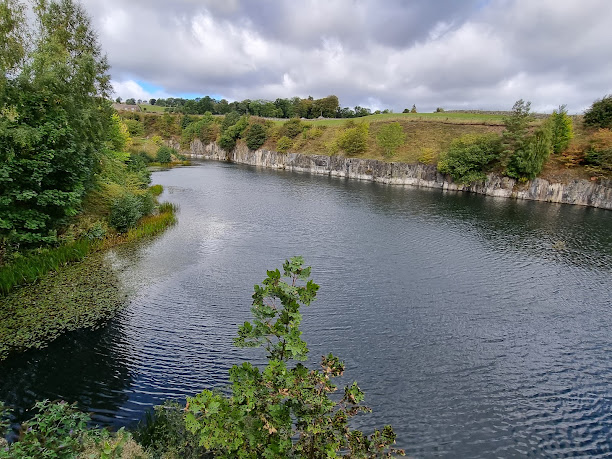 It was only a mile from Greenfoot back to Stanhope Market place which is where we came across yet another piece of historical interest in the form of a fossilized tree which now stands in Saint Thomas's church yard. The fossil was created when some 320 million years ago  the sand from a river filled the trunk and roots of a dead tree. Over time this sand turned into sandstone forming a perfect cast of the tree and it's roots. The fossil itself was found in a quarry near Edmundbyers Cross in 1915. 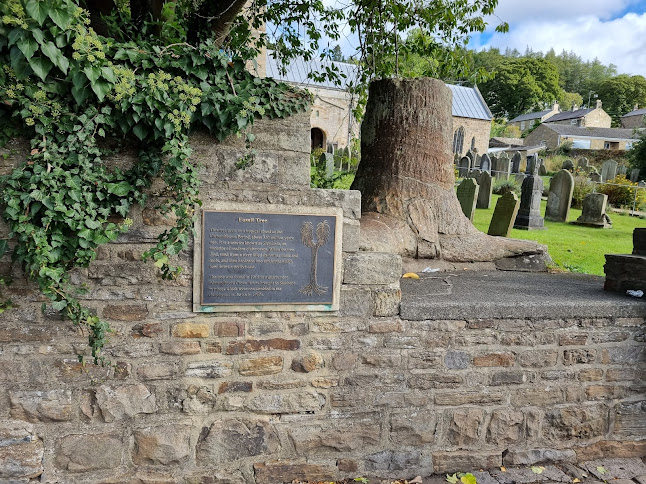 For me the fossilised tree was a fitting end to what had been an enjoyable trip through Weardale's industrial past. The walk itself (without the diversion to the Rookhope Arch) is around six and a half miles and although I was walking it as part of the Weardale Way would make a good stand alone walk in it's own right. If (as I did) you get the bus from Stanhope to Rookhope the walk back is predominantly down hill. As mentioned there are some sections which are overgrown and hard going underfoot, but the views and the history make it well worth the effort. 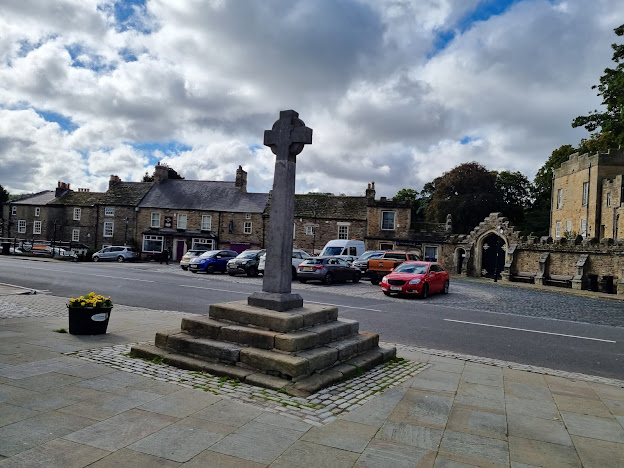 Note for dog walkers - Following as it does, either Rookhope Burn or the River Wear water isn't an issue. Also there were no horrendous stiles or fences on the route where I had to lift Scout over. There were livestock in most fields which wasn't an issue as I personally keep Scout on a lead at all times and would suggest others do too. 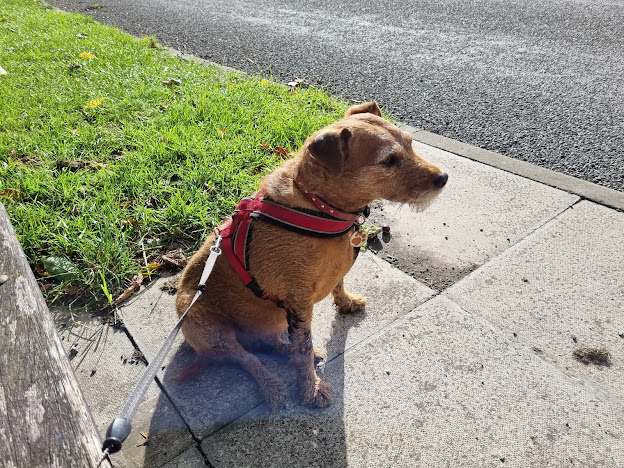